How A Series Can Skyrocket Your Career with Geri Krotow

Geri and I hit it off immediately – we bonded over our experience with the U.S. Navy – and she impressed me with her vivacity and love for what she was writing. I have since learned that she brings that joy to everything and I was thrilled to have her come and visit RU!

It wasn’t too long ago when the goal of any aspiring author was to get “the call.” This used to be from a traditional publishing 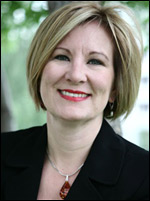 house, from an editor who appreciated your story and most importantly, your voice. While that is still a valid goal, there are many other ways to get your story to readers, from small press to indie publishing. Whichever route you take to publishing, the one thing that you must consider from a story aspect is whether your book is going to be a solo act, or if it will be part of a bigger, grander scheme: the series.

I know it’s daunting. The energy, sweat and tears that go into one book, especially your very first, make it less than desirable to even think about continuing your journey with more books that have some of the same characters and most often a shared setting. You want to write something new, fresh. I get it. My suggestion is to make book #2 in your series fresh with new characters and new conflict, a new plot.

So why a series?

1. Series give readers (and you) a sense of community. Your series setting is a place your readers want to come back to again and again. They love the familiarity of it, and it becomes a reading “home” to them.
2. Each time a new reader picks up one of your books, and likes it, there’s a good chance they’ll purchase some or all of the rest of your series.
3. You can use your series to add extra goodies to your website for your readers. A map of the community, the community’s local paper, character profiles are just a few examples of extras that readers love.
4. As mentioned in #2, readers will find you again and again—with each new book release in your series, you will see a bump in sales of the previous titles.

A major point to consider when writing a series is that each book, each story, MUST be stand-alone. You want a reader to be able to pick up any of your books, no matter its place in your series, and experience an emotionally satisfying read. Why? So that they’ll go back for more—and read your backlist (see points #2 and #4 above). And pre-order your next book in the series! Do you see a pattern here?

Series build readership. The title I picked for this post says “skyrocket,” and while I do believe this is possible with a series, what’s more doable is that it will help you build your readership book by book, reader by reader. It’s more of a snowball effect. It can feel like you’re pushing the snowball up an icy mountain, with no traction. I get it. But one day you’ll be doing revisions for the fifth, tenth or more book in your series, and realize that you have an entire readership waiting for your story.

Once you’ve decided your “in” for a series, there are many things to consider in terms of plotting (yes, even if you’re a pantser), character development, story arc, setting and more. That’s another blog post!

Please leave a comment on your experience or impression of writing a series and have a chance at winning a signed copy of Navy Christmas, the fourth book (and sixth story counting online reads and novellas) in my Whidbey Island Series. 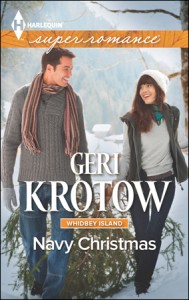 Geri Krotow is the award winning author of contemporary and historical romance. While still unpublished Geri received the Daphne du Maurier Award for Romantic Suspense in Category Romance Fiction. Her 2007 debut A Rendezvous to Remember earned several awards to include the Yellow Rose of Texas Award for Excellence. Geri’s first novel as well as her second book What Family Means received critical acclaim to include a review in the Chicago Tribune.

Prior to writing, Geri served for nine years as a Naval Intelligence Officer after graduating from the United States Naval Academy in Annapolis, MD. While on active duty Geri earned her Master’s Degree in Information Systems from the United States Naval Postgraduate School in Monterey, CA. Geri served as the Aviation/Anti-Submarine Warfare Intelligence officer for a P-3C squadron during which time she deployed to South America, Europe, and Greenland. She was the first female Intel officer on the East Coast to earn Naval Aviation Observer Wings. Geri also did a tour in the war on drugs, working with several different government and law enforcement agencies.

Geri was proud to serve her country and after nine years of active duty she resigned her commission. She never looked back as she gave in to her desire to be a full-time novelist. Geri is grateful to be a retired Navy Spouse and to be settled in Pennsylvania with her family. In the midst of pseudo-empty-nest, Geri lives with her husband and daughter full time and her university son when he comes in for holidays. A parrot and dog round out Geri’s writing life.