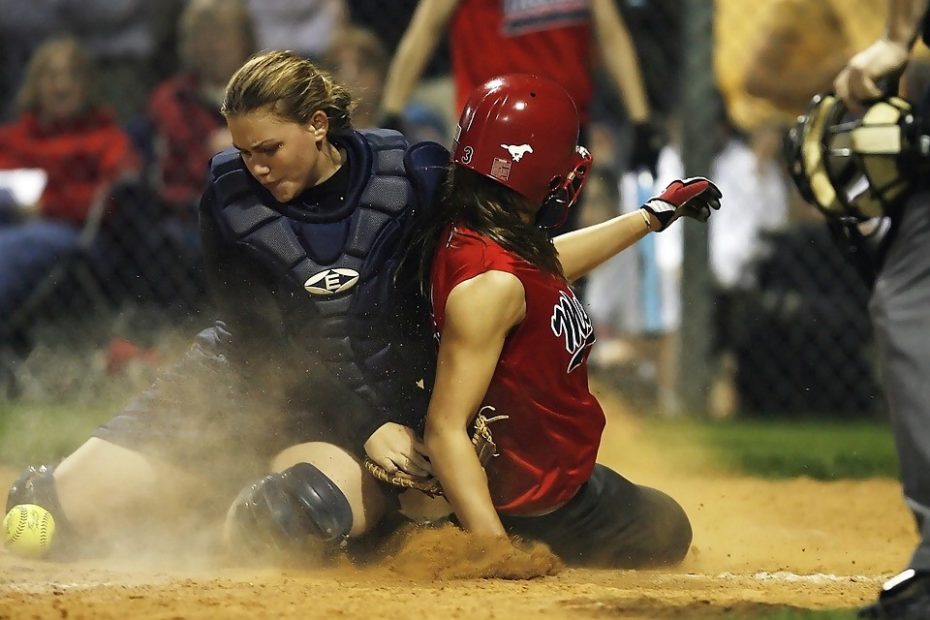 Fielding is about a delicate balance between footwork, fielding mechanics, and accurate throwing. The element of surprise will always exist in softball, and consequently a fielder needs to be ready to chase the ball in any direction and to respond by throwing it to the correct player instantaneously. The blind wall drill is a great way to prepare players for the fact that they will never know quite where the ball is going by asking them to field a ball coming at an unknown angle and then fluidly respond by passing the ball to the appropriate player.

A Look at the Drill

The blind wall drill is set up with three players, two cones, and two buckets near a wall. Two of the players should be stationed next to the cones, which should sit approximately 20 feet apart. The cones should be a reasonable distance from the wall. The fielding player will be between the wall and the cones. Each cone should have a bucket next to it. The fielding player faces the wall. A coach or another player stands behind the fielder with a number of tennis balls.

The coach or player throws the tennis balls at the wall so that they bounce back as grounders that the fielder needs to chase. They should be thrown at various and changing angles, so that the fielder is unaware of the direction that the ball will bounce back at. The fielder needs to retrieve the ball and then complete the play by throwing the ball to one of the players at the cones. They should alternate which player they return the ball to with each grounder thrown.

The distance that the fielder is from the wall greatly impacts the difficulty of the drill. As a fielder masters the drill, try moving them closer to the wall so that they must improve their reaction time to successfully return the balls. You can also increase the speed at which you throw balls at the wall, starting each new throw as or before the fielder tosses the last to the players stationed at the cone.

Instead of having the fielder alternate which player they return the ball to, you can increase the challenge by calling out “left” or “right” (or even the name of the player standing at the cone) as the fielder is retrieving the ball. This increases the test of reaction time and makes the drill more mentally challenging to the player.

To focus on teamwork and calling plays, try adding more players to the drill. Have 2 throwers and 2 fielders. The players now need to collaborate to decide who fields which ball, who returns the ball to which cone, and to avoid one another while fielding and returning the balls. This encourages awareness of other players on the field and vocally calling a play as you complete it.

To make the drill a tougher workout, try giving the fielder a paddle instead of a glove. They need to hit the tennis ball back at the wall with the paddle, rather than fielding it and returning it to another player. This can also incorporate more players into the drill, as you can have more fielders responding to the balls that bounce off the wall after they are returned with a paddle. Another alteration is to have the fielder wear soft gloves, such as batting gloves. This not only requires more running but makes the fielder catch the ball more precisely than they would if they had a softball glove on.

Coaches can also try throwing the tennis balls so that they bounce back as pop flies as well as grounders. This further increases the element of surprise and keeps the fielder on their toes.