Care Package: Watching Romancing the Stone With a Mindful Eye With Damon Suede

CARE PACKAGE: watching Romancing the Stone with a mindful eye

Raise your hand if Romancing the Stone is one of your favorite films. No surprises there. I’d guesstimate that it’s on the lot of romance authors comfort watch lists. I have watched it hundreds of times.

Romancing the Stone was written by a gifted screenwriter (and avid romance reader) named Diane Thomas while she was working as a waitress in Malibu. The screenplay was written on spec, meaning she wrote it without a contract and with no guarantee of production. Thomas’ friends would later call the project a labor of love. As fate would have it, Hollywood scion Michael Douglas patronized her restaurant and took a pitch from her, before acquiring the script and hiring Robert Zemeckis, a flailing Steven Spielberg protégé, to direct.

Douglas was looking to produce a movie on the cheap and saw the appeal instantly. Hollywood did not. Studio chiefs insisted that it was an Indiana Jones rip-off, ignoring the fact that the Thomas’ script had been written at least two years prior to that film’s 1982 release. During casting, the Jack T. Colton role was offered to Sylvester Stallone (oy!) and Christopher Reeve (odd) and others, but ultimately Douglas took on the role after all the bigger names declined declined and Zemeckis convinced him.

So, with a director of several flops, an actress desperate to shake off the sex-symbol status she’d picked up in Body Heat, and no bankable stars, the film went into production in Mexico to maximize their budget. During the shoot, Douglas and Turner had a brief affair and she was frank in her belief that their relationship added enormous chemistry to their relationship on screen.

Before its release, Fox Executives viewed a rough cut of RTS and were so certain it would flop that he was fired as the director of Cocoon, then in pre-production. Prior to the film’s release, critics savaged it, calling it “charmless” (NY Times), “expected” (Variety), ” genuinely depressing” (Chicago Reader).

To hear everyone opine, Romancing the Stone never had a chance. 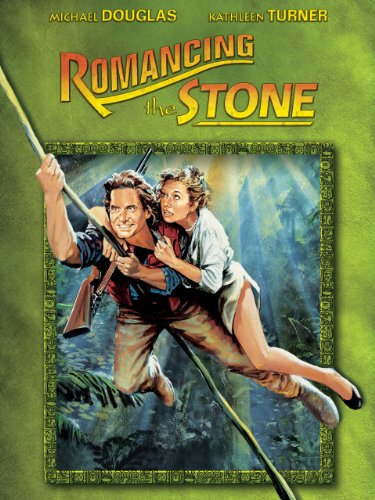 Produced at a rough cost of $10 million, Romancing the Stone went on to become Fox’s most successful film of 1983, grossing over $86 million internationally, making it an enormous, career-defining hit for all involved, launching Zemeckis as a director (e.g. Back to the Future came next), established Turner as a gutsy romantic lead with serious comic chops, and turned TV actors Douglas and DeVito into bonafide movie stars.

Funny thing: Romancing the Stone never became a smash hit; it earned every accolade and dollar at the box office. In its fifteen weeks of release, it never ranked higher than third in the country’s grosses… but in its favor it had amazing word of mouth. Audiences loved this scrappy little movie and spread the word passionately for months. RWA member Catherine Lanigan ghostwrote the movie tie-in novelization for Avon as “Joan Wilder” and crafted a rock-solid romance novel (I still own my battered copy). Douglas, Turner, and DeVito would reunite for a (hideous, misguided) sequel the next year, but what they captured in this film is the stuff of romance legend.

Incidentally, Romancing the Stone currently ranks at #8 in box office successes in a year which included decade-defining blockbusters like Ghostbusters, Beverly Hills Cop, Indiana Jones and the Temple of Doom. Ironically, it released at the perfect moment to ride the romance wave that had launched the RWA a few years prior.

Romancing the Stone invented a new cinematic hybrid, a perfect genre mashup of comedy, adventure and romance. Clones followed it thick and fast; the heaps of pulp-inspired popcorn movies that swamped entertainment for the next five years owed more to Thomas’ witty, parodic screenplay than to the kid-friendly Indiana Jones movies. In fact, Steven Spielberg was so impressed by Thomas’ work, he hired her to pen the next Indiana Jones sequel. 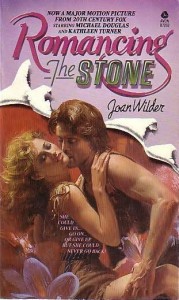 triumphant release at 39 in the Porsche Michael Douglas had given her as a thank you present for her work on the original picture and her help on the upcoming sequel. After her funeral, Spielberg established a screenwriting award in her name at UCLA in support of undiscovered writers.

Romance authors love Romancing the Stone because it simultaneously ribs and respects the genre. Thomas got romance at a visceral level, and for all the winking sendups of romantic cliché, she embraces them shamelessly… no small feat. It has remained a touchstone in Hollywood and within the Romance community for a simple reason:

Romancing the Stone remains one of the only blockbuster hits in pure romance.

Most of the movies audiences categorize as classic romance films are actually melodramas or tragedies: Camille, Now Voyager, Casablanca, Gone With the Wind, Officer and a Gentleman, Titanic… etc. Not one of them ends happily. For an HEA you really have to look to Rom-Coms (with screwball structure set down by a suspicious number of adapted plays) and their shameless, bedazzled cousins, the American Musical (also adapted). And incidentally, those are NOT the flicks that make bank as a rule. For all sorts of idiotic, sexist, and sex-negative reasons movies that focus completely on relationships are seen as a box office risk.

Now I have spent twenty-plus years working in film and I have some theories about exactly why romance struggles on screen. Books aren’t movies, even a little. There are certain types of books that are easier to film, because of the basic mechanics of film production and projection. Technically, the camera likes movement and spectacle. We really are more of a vide-ence than an audience when we go to the movies. The truth is, romances are incredibly difficult to film for a host of reasons: casting perfect lovers, all that internal wrangling, and the unwieldy plots that just don’t lend themselves to two cans of film and sitting in a crowd in the dark looking at light on a wall.

Ever wonder why so many big budget projects look like their assembled out of the same 15 tinker toys? Demographics. I call these generic projects “guys doing stuff…with a MODEL!” In 95% of this output, men are subjects, women are objects and mostly things go boom and fall down.

Ever wonder why you see lots of family-features about “empowered” females, but so damn few female superhero movies? Well, childcare still falls largely to the female parent and moms buy those tickets. The buck stops there. A full on, balls-out purple prose romance that succeeds at the box-office and revels in its indulgent, escapist identity is pretty rare in showbiz.

Incidentally, the studio logic behind this rock-solid, if simplistic: romance readers are predominantly women. Mega-smash movie tickets are primarily sold to young males with a very narrow spectrum of universal interests. Maximizing your opening weekend box office means minimizing everything that doesn’t appeal immediately to this demographic. A LOT of things do not appeal to this demographic, including subtitles, extended conversation, introspection, period settings, complicated plotting or evidence, ambiguity, high comedy, etc. Woe betide the eager screenwriter who overloads a studio picture with these bugaboos. The meetings suck and the checks dry up.

Even worse, all the stuff that romance does so well:

…is the stuff that Hollywood really struggles to do at ALL, let alone simultaneously.

Honest-to-Austen romances are pretty damn rare in Hollywood history. We get lots of problematic adaptations of romantic bestsellers…usually in blockbuster subgenres like YA paranormal/futuristic (Twilight or Hunger Games) or “chick-lit” (Devil wears Prada, Bridget Jones’ Diary). We see plenty of near-romances (Gone With the Wind) and lots of Rom-Coms. Every few years a lush period film intended as Oscar-bait dutifully goes through its paces, successfully or not.

Notice what all of these successful romantic films have in common: a heightened relationship, potential humor, and built-in action sequences. A perfect three-pronged attack, with enough meat for any kind of carnivore. Subgenre gives bonus points because they offer bells and whistles to drag the other punters in as well. A blend of Comedy, Action, and Romance evokes unforgettable Emotions that create explosive word of mouth across audience lines.

In addition to being a knockout entertainment, I’d respectfully suggest that Romancing the Stone presents the best single model for writing actual romance in the movies. No other blockbuster romance movie exists AS a romance that embodies and celebrates the genre so effectively. Diane Thomas carefully broke down what romance had to do, and what a popcorn movie needed to do and then found all the points of intersection to create something that’s singularly successful.

When I was a wee lad I tracked down every available draft of the Thomas screenplays for Romancing the Stone, the original 1980 draft, the 1983 production draft, and the continuity draft from 1984. I sat reading and comparing those drafts, watching and rewatching those movies, and then comparing all three to my own readings of romance fiction and tent-pole screenplays. Back then, I did it to help my own scripts, but now that I’m writing romance the lessons are doubly useful.

Craft and wisdom and genre awareness flexes under every second of the film. Over and over Comedy is used to shift between Romance (Internal) and Adventure (external) like a transmission. Each of story beat is anchored by the resultant Emotion generated by those transformations….Brilliantly, Thomas combines parody and homage so that romance fans and romance foes are equally charmed and entertained.

The next time you have two hours and you feel like playing with the way that the mechanics of Hollywood and Romance can coexist, cue up the original 1984 classic. It’s well worth the time, and the impact on your own writing might surprise you. Grab a pen, pad, and a stopwatch and get cracking. Pause often, watch closely, and take the movie apart to figure out what makes it tick.

• Clock those emotional beats…literally track the minutes and second at which pivotal events occur.

• List all of the character growth moments, the classic romantic tropes, and the ironic reversals. Notice how they are spaced and interrelated

• Keep an eye on the use of peril and escape; pay attention to the ways danger is defused by laughter and when/why/how over-the-top romantic moments get deflated.

• Note the critical props and settings used to anchor themes and internal states.

• Track the interplay between homage and parody, so that the movie never sinks into sentimentality but still offers plenty of schmoop.

• For bonus points listen to the commentary and interviews for even more insight into why certain beats got cut or shifted for maximum effect. 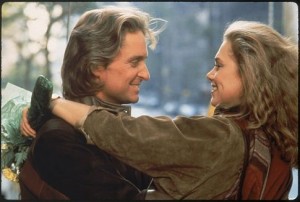 If you’re detail-oriented, you can even print out a simple table rows for each of the film’s 104 minutes so you can make notes. I did, and I discovered some crazy genius moves by Thomas that elevate Romancing the Stone from popcorn into legend. Now, if we had a couple hundred pages, I could share my own discoveries, but I think you’ll learn different lessons than I could.

What I love most about it is that like me, Diane Thomas was a screenwriter who loved romance too much to handle it sloppily. And though she is gone, her perfect CARE package lives on. For the past couple years, rumors of a Romancing the Stone remake have haunted me. They’ll mess it up in regurgitation, and I hate the thought of anyone messing with perfection. It matters not, because they’ll pry the DVD Collector’s edition of the original from my cold dead hands.